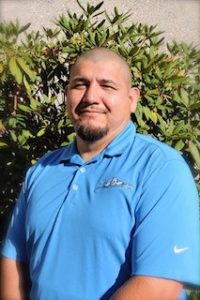 For the past eight months Fahey Machinery Company’s Service Department has been led by Sergio Maldonado and he is fitting right into the role! Sergio started with Fahey in October of 2017 as a Service Technician and within no time his leadership potential became obvious to upper management. Sergio started in the industry as a forklift mechanic assistant and due to being a extremely fast learner and living what he was doing he eventually moved up to working on and repairing machinery, which has led him to where is today with Fahey Machinery. Although he spends a great deal of time in the office now managing the team and repairing Fahey stock machines, he can still be found out in the field assisting his team and filling in where needed, still to this day his favorite machine to work on are shears.

Originally from Lincoln Heights in Northeast Los Angeles, California. Sergio moved to the Portland, Oregon area in 2014 with his wife and children, he is a proud father of nine and loves spending time with all his children fishing, camping, and playing sports. Sergio is a great leader who believes the quote “People will sink the whole ship just because they cant be the captain.